Jared and Melony first met when they both worked at Lake View Camps in Pella during the summer of 2011. Sparks started to fly as the two went on a couple dates that year and continued to both work as counselors for the next three summers. However, Jared was attending college in Ohio, while Melony was going to school in Pella so nothing major developed from their summer lovin’.

But as fate would have it, the two ended up both attending the University of Iowa, both with the intent to become a physical therapist. The two quickly reconnected, and in October of 2014, the two began to officially date.

We asked Jared to share some of his favorite memories from their big day. Here’s what he had to say: 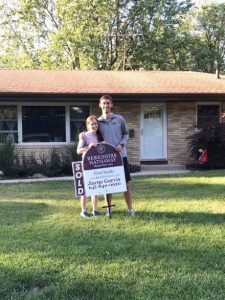 As you can see, the Gerbers had a lovely wedding day and made for one of the happiest wedding couples we know.

However, one major life change wasn’t enough for the Gerbers in the month of June. They closed the month out by purchasing their first home in Newton, Iowa. The two look forward to settling in and making this place home as they begin their married life together and Jared continues in his practice as a physical therapist in Newton.