At Kinetic Edge, we’re celebrating the marriage of our occupational therapy 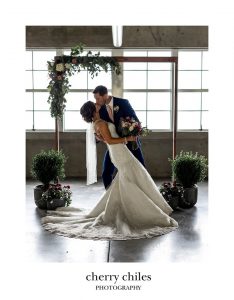 assistant Katie Williams to Sean Gosewisch. Katie and Sean were married on the Iowa State Fairgrounds on May 18.

The two met through mutual friends in Oskaloosa right after Katie graduated from William Penn. However, other relationships kept them from dating until they ran into each other about a year later and found out they were both single. So they went out for a simple date in Oskaloosa and ended up singing a ton of mutually loved songs in his car to end the night. Katie says even now that their shared love of singing is one of the things she loves most about him.

Sean proposed to Katie under the stars in the mountains while the two were visiting a friend in Aspen. Katie says he compared their love to the infinite number of stars and then completely surprised her with his proposal. Talk about a romantic!

We asked Katie to share some of the best parts of their big day, and this is what she had to say: