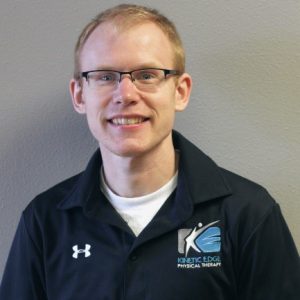 Watters announced he and his family were making plans to move to do missions in Costa Rica (read that article here). On August 3, Joel will spend his last day working as part of the Kinetic Edge Team.

Joel reached out to Kinetic Edge (well, we were Work Systems Rehab & Fitness at the time) over five years ago since his wife, Rachel, was taking a position on Intervarsity at Central College. It was obvious when we met with Joel for an interview at McDonald’s in Newton that he was a good candidate. (We didn’t know it at the time, but Joel entered the restaurant and met with us while Rachel, his wife, sat in the car parked outside!) We quickly learned in that meeting that Joel’s personal values and beliefs were an excellent match for our company.

“The character of our team members is extremely important to Kinetic Edge, and it has been for a long time,” shared CEO and Physical Therapist Troy Vander Molen. “We hire people who have excellent character, as well as great chemistry with the team we’ve built. This is even more important than competence, which is easier to train. It was obvious, though, that Joel had all three – character, chemistry, and competence.”

During that meeting, Joel also shared why he became interested in physical therapy as a high schooler. His mother received physical therapy care and enjoyed her experience, so she had Joel see the same physical therapist for running-related injury issues. As a result, Joel’s mother encouraged him to consider the field of physical therapy.

We later discovered that Troy Vander Molen, our CEO, was the physical therapist who had cared for Joel and his mom while working as a physical therapist at Linn County Physical Therapy. Small world! With all these things going for Joel, it seemed only fitting to make him part of the team.

We are sad to see Joel go, but we are so proud of his willingness to follow God’s leading in his life! We asked him to share a few final thoughts before wrapping up his time at Kinetic Edge. 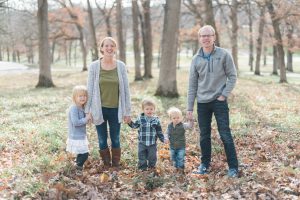 My name is Joel Watters, and I have worked as a physical therapist with Kinetic Edge Physical Therapy for the past five years, spending time in both our Pella and Oskaloosa clinics. My family and I have accepted a call to serve college students overseas in Costa Rica with InterVarsity Christian Fellowship. We will be leaving on this new journey at the end of August.

As we prepare for this transition, certainly one of my biggest losses is my work as a physical therapist with Kinetic Edge. I have absolutely loved this work. It has been a joy to serve alongside the Kinetic Edge team in caring for our communities. I am grateful for all the patients I have had the opportunity to serve and this company that has supported me along the way. It has been incredibly meaningful to share this journey with so many of you and have a front row seat to people finding health, happiness, and hope!

John Lenderink will be stepping into my position at the Pella clinic. He is a great physical therapist and will serve our community well. I am grateful for him and couldn’t think of a better person to join our Pella team.

I don’t know what the future will bring but I hope to stay connected with many of you even as we move away. I am grateful for this season and hopeful for the next!

Like Joel, we are so thankful for the addition of John Lenderink to our Kinetic Edge team in Pella. John joined the team last November and has spent much time with Joel as we prepared for Joel’s departure. So many of our team members and clients have commented how we couldn’t have found a better fit to fill Joel’s shoes.

One of the things we love most about Joel is that he’s extremely conscientious and cares for people deeply. This will be missed by our entire team, in addition to the many clients he’s worked with over the years. Nevertheless, we are excited to see how God will use Joel, Rachel, and their family. Though the skills he’ll use in Costa Rica are different than his physical therapy skills, the same strengths that make him an excellent physical therapist will help him show God’s love as he serves in Costa Rica.  So with sadness and excitement, we say “hasta luego” (see you later) to Joel. May the Lord bless you and keep you.