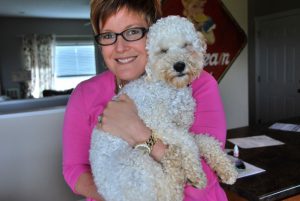 Getting a dog wasn’t something occupational therapist and mother of two Elise Spronk planned to do this year. But after constant pleading from her 12 year old son Bennett, Spronk started contemplating bringing a furry friend into their home.

“Both of our boys had to do several things, including writing a report on the benefits of a pet, specifically a dog, before we finally agreed” stated Spronk. “Once my husband was on board, we spent a morning researching what it would cost to own a dog.”

When all signs came up go, the hunt for the newest member of the Spronk family began.

“Initially we were looking at a few breeds of puppies,” said Spronk. “However several things combined with my fear of raising a puppy, which seemed scarier than raising a baby because they don’t wear diapers and pee on the carpet, caused us to start looking at older dogs, including rescue dogs, online.”

Most of the rescue dogs the Spronk family saw online were big, mean-looking dogs which intimated these first time dog owners. But then they stumbled across Gizmo, a one year old toy Bishon Poodle. Spronk and her nine year old son Cooper instantly fell in love. 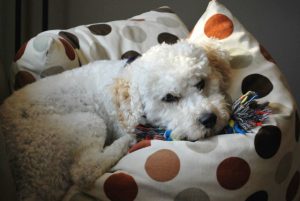 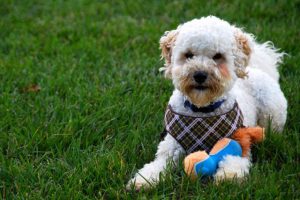 Gizmo was at Dogs by Debin, an animal shelter in Kansas City. Spronk contacted the shelter who willingly saved Gizmo for them until they could make the road trip to pick him up six days later.

“It was love at first sight,” said Spronk. “We couldn’t imagine why someone gave him up!”

But bringing man’s best friend into their home hasn’t been all fun and games. Spronk’s family found out Gizmo was originally going to be euthanized because of nipping, which spurred the idea for his new name: Charlie.

“If Charlie did bite, we thought we’d at least get a kick out of saying, ‘Charlie bit me!’ like the YouTube video,” commented Spronk. “We were told Charlie would be good with our older, respectful boys, but he did nip at them, and we considered having to give him back up.

However, advice from friends and family and a few occupational therapy techniques caused the Spronk family to make drastic progress with Charlie and his biting habits.

“He has definite signs of anxiety so we’ve created some safe ‘hideout’ areas for him to go, especially when we have guests,” Spronk shared. “I’ve also tried brushing, similar to the brushing occupational therapy uses to release calming endorphins for children. He’s gone through periods of not liking the food we’ve provided, and I find myself trying to get him to at least play with it or smell it like I recommend with picky eaters. That one hasn’t worked as well.”

Spronk also tried to get Charlie to sleep in his kennel with techniques similar to getting a child to sleep in the crib. She tried lying next to him, petting him, and gradually moving a little farther away but eventually decided that co-sleeping with Bennett was an easier idea. 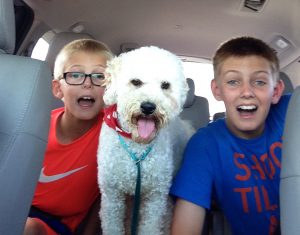 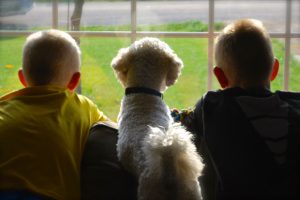 While it hasn’t always been easy or glamorous, the Spronk family has come to accept Charlie as one of their own and can’t imagine their family without him anymore.

“Adopting Charlie has been an excellent learning experience for our family,” said Spronk. “I can’t imagine not seeing him sitting in our window, barking his head off when we pull into the driveway. Yeah, I haven’t figured out an occupational therapy technique to manage that one… yet.”

If you’re interested in how occupational therapy could help your child, check out this article by Elise Spronk!