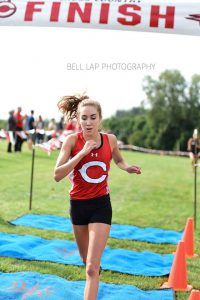 Rachel Peter always loved to run. After running track and cross country at PCM (Prairie City/Monroe) High School, she went on to compete at Central College in Pella, Iowa. During last year’s cross-country season, Peter started to feel pain in her left leg. The junior dismissed the pain thinking it was a muscular problem, but when the pain gradually grew worse, she knew something more serious was going on.

Peter scheduled an appointment at Pella Regional Health Center where an X-ray revealed a large black circle around her bone.

“I felt very overwhelmed and shocked when the doctor described what was wrong,” said Peter. “I mainly was just worried about when I would be able to run again and if it would ever be the same.

To Peter’s relief, Giant Cell Tumor of the Bone is a noncancerous tumor that most often develops at the ends of the body’s long bones like the femur or tibia. Given the uniqueness of her situation, Peter went on to see a specialist at the University of Iowa Hospital. Surgery was the only option she faced to remove the tumor. Without surgery, the tumor would continue to grow and destroy her bone.

They scheduled surgery for November 7, 2017, just a few weeks after the tumor was discovered. Surgeons spent hours removing the tumor from the bone and replacing the area with bone graft. Post-surgery, Peter spent six weeks without putting any weight on her left leg.

Around four weeks after surgery, Peter started physical therapy with John Lenderink at Kinetic Edge Physical Therapy. Therapy first focused on restoring Peter’s range of motion and then progressed to focus on restoring her strength and weight bearing tolerance. 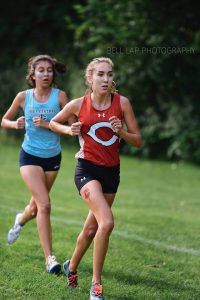 In March, the news Peter anticipated for four months came: she could start running again! As of September 2018, Peter happily reports she’s healthy and back to running like she used to with no pain, averaging 45 miles a week during the current cross-country season.

“I am very grateful to be back to running and competing in cross country,” shared Peter. “Reflecting back on where I was just a half a year ago, I am amazed at the progress I have been able to make.”

Peter will never take another step or stride for granted now, saying the entire experience in the past year has made her so grateful to be healthy and to be able to run again.