HOW HOPE IS TRANSFORMING LIVES IN COSTA RICA

HOW HOPE IS TRANSFORMING LIVES IN COSTA RICA

How hope is transforming lives in Costa Rica

On August 21, former Kinetic Edge Physical Therapist Joel Watters and his family celebrated their one-year anniversary of mission work in Costa Rica with Estudiantes Cristianos Unidos (ECU). ECU is a ministry that serves college students on universities throughout the country of Costa Rica. We’ve asked him to share an update on life there with you but were so thrilled to hear how he’s continuing to live out the Kinetic Edge mission in Costa Rica.

It has been quite the year in Costa Rica and difficult to summarize, but I shall try. 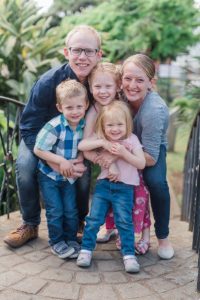 Life has been hard but oh so sweet and meaningful. Each day we have walked the mile to school as a family. My wife Rachel and I have spent the mornings in Spanish class and then alternate serving on three different campuses in San Jose, the capital. Our children have transitioned better than we could ever have imagined. They attend a bilingual school and are well on their way to fluency. My oldest daughter speaks Spanish like a Costa Rican! I still speak like a white gringo. Overall, we have loved living life together and serving the Lord as a family here.

In November, we will move to the southern part of Costa Rica to a city called San Isidro de El General. Our ministry, ECU, was founded here over 40 years ago but has never had a presence on any campus in this region. We’ve been asked to plant a new ministry and start new student groups on these universities. 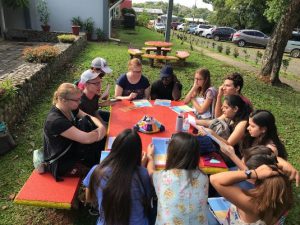 The southern zone is much more rural and life will be quite a bit different than in the capital city. It is not Iowa but it’s about as close as it gets here with pineapple farms, year-round greenness, and mountains.  Our past experience with planning new student groups with InterVarsity Christian Fellowship in the United States creates confidence and excitement for this new opportunity, as we love the call of starting something new. We will begin searching for a home, school, church, and everything else we need to live in this month.

I have loved this new season of life in ministry but certainly miss my work with Kinetic Edge. I am so proud to have worked for a company that honors people above all else. Thankfully, I still find opportunities to use physical therapy to serve people here. I have one story of a man named Rigo that I would like to share.

Five months before I met Rigo, he began falling and experiencing weakness in both his arms and legs. The progression of weakness was so severe after two months he became bed bound, unable to sit up or move to a chair without significant assistance.

After extensive testing, a severe case of spinal stenosis was found in the middle segments of Rigo’s neck which was causing impingement of the spinal cord. He, his wife, 3 children, and grandson live in a tiny four room house in one of the poorest communities in San Jose. They were unable to afford the care he needed so after surgery, he returned to his bed. Word of his situation finally reached a skinny gringo from Iowa with limited Spanish, and I jumped at the chance to serve him. Ever since, I have been meeting with Rigo weekly and have seen an incredible transformation.

The first day I met him, Rigo had not been out of bed since he returned home three weeks earlier from surgery. I quickly realized not only was his body very weak, but more significantly, he had little hope. He was distant and quiet and showed little emotion. I sat next to his bed and listened to his story. I could feel his sadness and frustration. 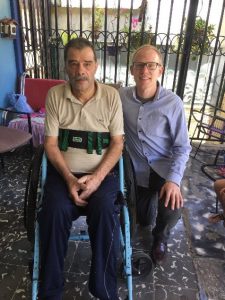 That day, I taught him one seemingly small thing: how to use his body position to sit up. It was simple, a roll to the side, a movement of his legs off the bed, and the use of his hands to push himself up. It was hard for him as I helped him, but he did it. I had him lay down, and then we did it again.  After five minutes, he was able to nearly sit up independently. He tired quickly so he laid back down, and we prayed together.  As I left that day, I will never forget the look on his face. There was hope.

Within a month, he was able to transfer to a wheel chair independently. Within three months, I bought him a walker. At eight months, he took his first steps. He continues to have weakness and pain and will likely never walk again without the assistance of a walker. However, his life has changed. He is able to sit and eat dinner with his family. He gets outside to watch his grandson play on the patio.

I believe two things have saved his life: his deep faith in God and a renewed hope that tomorrow will be better than today. It has been an honor to serve this man and makes me want to continue giving my life for others.

God has been so good to our family this past year. We experienced His faithfulness again and again. We experienced a deep dependence on the Lord in a culture so different from ours with a language that we are just now feeling comfortable with. We miss our home, community, friends, and family but at the same time are so grateful for the opportunity to serve the Lord. There are many unknowns ahead and assuredly many challenges that will come, but we walk forward into our next year with hope, trusting that God will provide.

Like our family and even Rigo, I am sure many of you are dealing with challenges and difficulties. I pray that through them you experience the goodness of God and are able to live with hope for tomorrow.

Find out ways to help support the Watters and their mission by visiting: https://donate.intervarsity.org/donate/to/RachelJoelWatters