Ames third grader, Ben Smith, starting coming to work with Kinetic Edge Occupational Therapist, Rachael Barnette, last year to work on his handwriting. In one of his sessions early this year Ben mentioned to Barnette that he was worried about his father’s safety when he came to pick him of from Edward Elementary school. Ben’s father, Brad Smith, is blind and a busy intersection that he used to pick Ben up from school and take him to his appointments did not have an auditory crosswalk to aid him in crossing the street. “If dad crosses, or anyone, if they don’t know if it’s a green light, there could be an accident,” Ben said.

When hearing his concern, Barnette had an idea. What better way to work on his writing skills then to write a letter asking the city to update the crosswalk and make it safer for all of their citizens? So Ben got to work, writing two drafts of the letter. Rachael and Ben faxed the final draft to the city on February 10th and to everyone’s surprise he got a response the very next day. 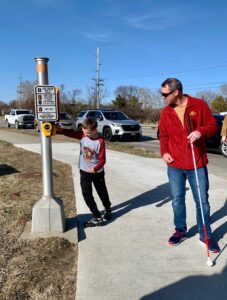 Ames traffic supervisor, Brad Becker, responded that they would get to work on this right away, and that he did. On Monday, April 4th, Barnette, Becker, Ben and his dad met at the intersection of Mortenson Road and South Dakota Avenue to use the auditory crosswalk for the first time.

When asked about how this all came about Ben’s dad said, “Ben was a little stressed out about the physical motions of making different letters, drawing and writing in general. Rachael must have asked him, as opposed to just writing random letter or words, what’s something important to you? That really was the key to getting him over his stress level about writing.” 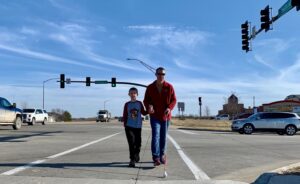 Barnette responded, “My job as an OT is to just find things that are meaningful for people and kind of use those as a tool for whatever goal we are working for. What’s more meaningful to a third-grad boy than his dad?”

“That’s how he is normally. He’s somewhat protective of me and my safety. He’s a good helper,” Ben’s dad said. “I’m glad to have a son like Ben.”

Writing therapy is one of the many services that our Occupational Therapists provide their clients. If you have questions about writing therapy or any of our other services call 866-588-0230 or contact us online.