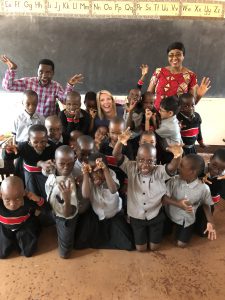 For years, Carol Kelderman looked for an opportunity to use her skills as a physical therapist on a mission trip in a foreign country. She always felt a pull towards Africa, and she even researched organizations to volunteer with there over the last couple of years. For some reason, none of the opportunities she came across ever felt quite right. So, when the pastor at their church mentioned a trip to Tanzania, she inquired more to see if her skills as a physical therapist might be useful.

“I was met with a positive response so I started to prepare for this possibility with an open heart,” shared Kinetic Edge Physical Therapist Carol Kelderman. “I want more than the ‘Christian version of the American dream’, so if I have an opportunity to serve, I want to be ready and willing.”

So with an open heart, Carol boarded a plane for Tanzania on March 15 with plans to spend two weeks serving the people of Africa. After 48 hours spent traveling (22 of those hours on planes), the team of five arrived at Hope of the Nations in Kigoma, Tanzania.

Carol spent most of her time working alongside a Tanzanian nurse and Linda Verhoef, a nurse on her team. The three of them assessed and treated a wide variety of people with all sorts of conditions. Donations from Kinetic Edge Physical Therapy and Mahaska Drug allowed them to make medical kits for Hope of the Nations’ boat ministry, college, primary school, staff members, and the general community. Carol and Linda also spent time training staff at the primary school and teaching schoolkids about germs and hand sanitation.

A highlight of Carol’s trip came when she met seven-year-old Abubakari, “Abu”, only a few days in to the trip. Abu contracted yellow fever when he was just days old. The yellow fever caused severe seizures and difficulty breathing, and due to limited treatment options, Abu became essentially paralyzed, unable to control his muscles or body position or communicate. This reality puts quite a strain on his family, including his mother who is pregnant with her fifth child when she and Carol met.

The team quickly realized that the right kind of chair would enable Abu to sit up and greatly help him and his mom. If Abu lived in the United States, he’d likely have a properly fit wheelchair along with physical therapy, occupational therapy, and speech therapy. But in Africa, limited resources and the scarcity of medical care meant the team had to get inventive.

“We were able to construct a chair using parts of our suitcases and help from the ladies in the sewing training center,” said Carol. “The chair provided adequate support and safety for Abu so he could remain in the main family living area where interaction with family and neighbors could happen more naturally. This also freed up mom’s hands as she is preparing for a new baby in the home.”

Carol noted that it was difficult to not be able to help to the extent she would have liked with Abu and others she met while on her trip. However, she was thankful to be reminded that much like in her hometown, education empowers and provides hope, something she and her team at Kinetic Edge Physical Therapy are quite passionate about.

“God is teaching me to be ready to serve, even outside of my comfort zone,” concluded Carol. “You never know what impact you can have on the people you encounter.”