Another year has passed, and I find myself being a bit nostalgic once again. I have been a part of the Kinetic Edge team for over 16 years now. That’s quite an accomplishment for a guy whose first two physical therapy jobs lasted less than a year each!

We are rounding the corner on our 20th year as an organization. I continue to wonder if the next year will slow up, but that hasn’t been the case yet! Here are a few of our favorite memories and accomplishments at Kinetic Edge in 2017.

Since we opened the Oskaloosa clinic in 2006, we had operated in a space on the east side of town. That location and its 2,100 square feet served us well for eleven years, but it was clear that our growth there required additional space. We were happy to acquire space on the west side of town. This 3,500-square foot location underwent a complete gut job, and we moved into brand new digs in February. Believe it or not, we’re already contemplating adding another 1,000 SF to facilitate the growth that has already occurred there since moving in. 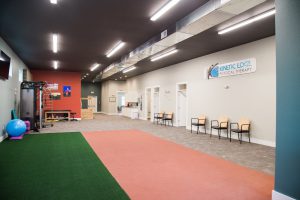 Similar to our situation in Oskaloosa, we had been in one building in Newton since we joined that community in 2007. We partnered with a local real estate investor to build and finish a new clinic in the heart of town along Business Highway 6 and moved into the 4,000-square foot facility in October. Our team there is loving the large and open gym space with high ceilings, in addition to private treatment rooms and a pediatric therapy space. Since our move, business has already increased another 20%!

Growth in the Mission

As an established business of nearly 20 years, projecting substantial growth from year to year can be a difficult proposition. You may remember that in 2016 we had 45% growth in client visits and 17% growth in consulting business compared to the previous year, which required us to add 7 team members. Is that sustainable for a clinic our age?

Amazingly, it has been. With a heavy focus on providing quality care and developing deep relationships, telling our story effectively with excellent marketing campaigns, and living out a commitment to generosity, we again experienced substantial growth in 2017. Our overall growth this year was 23% compared to 2016, and each clinic experienced no less than 15% growth. Our greatest progress occurred in Des Moines where we achieved a 40% increase in therapy visits compared to 2016. And the new clinic space helped us achieve 28% growth in Oskaloosa and 24% growth in Newton. These numbers are exciting to us because it means we are achieving our mission of transforming lives and restoring hope through movement in more people’s live than ever!

In addition to these new team members, we are currently searching for additional physical therapists and/or assistants in Oskaloosa, Newton, and Pella.

With mixed emotions, we said goodbye (or at least see you later) to Physical Therapist Joel Watters at the end of the summer. After five enjoyable years with Kinetic Edge, Joel and his family embarked upon a new journey as missionaries in Costa Rica. It has been fun getting letters and emails from him to learn about how God is using their family in this new calling.

Functional Training for All Team Members

In October, Kinetic Edge closed the clinic and invited all of our providers to Pella for a two-day learning event. We hosted Michael Kane, PT, a functional movement specialist to train us to use the 3D Movement Analysis and Performance System (3DMAPS). Now every therapist, assistant, and athletic trainer at Kinetic Edge has the advanced training and expertise to identify and correct functional movement deficiencies, which helps our clients get better faster.

With the additional space in Oskaloosa, we are now able to provide specialty pediatric physical therapy and medical fitness services. Likewise, in Newton we have increased our services to include pediatric occupational therapy and medical fitness services. Recently, Lauren Saehler, PT, DPT received Astym training, which means that all five our clinic sites now offer Astym as a treatment option for tennis elbow, plantar fasciitis, and other stubborn tendon and connective tissue ailments.

We believe that choosing a physical therapist or occupational therapist is a big decision. You don’t buy a car or a house sight unseen. You research this decision. You take a test drive or go through a home tour. That’s the wise thing to do, but medical providers operating in the insurance world often lose sight of these realities. We at Kinetic Edge do not.

Because we offer a service that requires mutual trust and clear communication, we want to give our potential clients the opportunity to test drive our clinic and take a free tour. Only then should you be comfortable making a decision about whether an investment in our team is a wise one. In 2017 we offered well over 350 free screens throughout our five clinic locations, and we hope to offer many more of these no-cost, no-obligation services as the years go on.

As a team that exists to transform lives and restore hope, we realize that there are many other local organizations that fulfill the same purpose using their unique passions and gifts. In 2017, we consciously increased our focus on being a generous organization to partner with others who share a similar vision. We were blessed and humbled to provide over $75,000 in donations to non-profit organizations in 2017 through our Christmas giving program, which included a $1,000 challenge for every team member. If you would like to read more about that challenge, you can find that story on our blog.  We also donated around $5,000 through our Join the Movement referral program in which we donate $20 every time a previous client refers a friend or family member our way.

Merchant of the Year Award

The Capital Striders Running Club promotes and encourages running, physical fitness, and amateur sport in the Des Moines area, and Kinetic Edge has offered free injury screens and Runner’s Edge Assessments to help members enhance running comfort and performance. Recently we began sponsoring a $1,200 scholarship, which is awarded to a student that loves running and has achieved scholastically, on behalf of Capital Striders. In 2017 our Des Moines clinic was honored by Capital Striders as the Merchant of the Year!

Our business began in December of 1998. Throughout the years, from our transition from Work Systems P.C. to Kinetic Edge Physical Therapy, our focus has not changed. We are excited to spend the entire 2018 year reflecting on the adventure that has occurred and preparing to celebrate those 20 years together with those that have made it possible. We couldn’t have done it without you, so thank you for your support over the years. We are looking forward to the 20th year being our best year ever!