HOW GOD PROVIDED THROUGH ADOPTION

HOW GOD PROVIDED THROUGH ADOPTION

How God Provided Through Adoption

Adoption wasn’t always the plan for Troy and Steph Vander Molen. But after a couple of years of trying to start a family with no success, they started to explore the concept of adoption. They were beginning to seriously consider it, only for Steph to find out she was pregnant shortly after.

This first pregnancy was not without complications though. At her first appointment, the doctor discovered she had an enlarged ovary that would require a second trimester surgery. Steph and the baby made it through the surgery, but the doctor told them that they’d surely have difficulties getting pregnant again after this pregnancy.

On February 12, 2000, the Vander Molens welcomed a healthy baby boy to their family and named him Kade. With the doctor’s speculation in mind, the Vander Molens reached out to Bethany Christian Services to learn more about adoption a couple years later.

“It was then that we first learned about Bethany’s amazing ministry and mission,” shared Troy Vander Molen, CEO of Kinetic Edge Physical Therapy. “We felt compelled to move forward, open to untraditional adoptions that may involve children of a different race than us.”

They quickly began the application process when, to their surprise, Steph became pregnant. They told Bethany to put their adoption application on hold, only to have their hearts broken shortly after with the news of a miscarriage around nine weeks. Months later, they again contacted Bethany, and again Steph became pregnant. To their great dismay, Steph miscarried again, this time at about six weeks.

“Shortly thereafter, late in 2003, our pastor was teaching a sermon series on being adopted by God the Father as His sons and daughters, co-heirs with Christ,” commented Troy. “On one particular morning, the service included the adoption stories of a couple of families from Pella told by video from the perspective of the fathers. Steph and I were both reduced to tears and knew without a doubt that God was calling us to adoption.”

Soon after this experience, the Vander Molens received a call from Bethany asking if they were still interested in adoption, as they had several upcoming urgent adoption needs. Within a few days, they had put together their application, filled out a family profile for birth mothers, and received a call that a family in eastern Iowa wanted to meet with them. 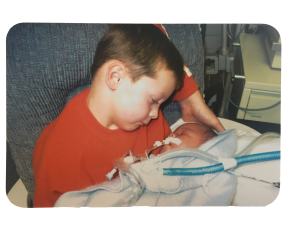 Two weeks later, the Vander Molens were sitting across from a young pregnant woman named Courtney who was due to give birth in about three months and her mother, Michelle. Although Michelle always wanted a large family, Courtney was an only child due to complications during Michelle’s pregnancy. So, Michelle loved the idea that her family could provide Kade something that her daughter couldn’t receive: a sibling. The Vander Molens were amazed at their kind consideration during a time that was incredibly difficult for their own family.

For the next few months, Steph traveled to the University of Iowa on a nearly weekly basis to attend appointments with Courtney and Michelle. They soon learned that the baby was a boy, and the four of them began to think on the child’s name. The biological family suggested three names, one of which was Joseph.

“When we studied the name Joseph, we learned that in Hebrew it meant ‘God will provide’,” shared Steph. “We decided Joseph would be his middle name, and after several weeks, we decided we liked the name Ty. Everyone believed Ty Joseph sounded and felt right.”

Then the call the Vander Molens were anxiously awaiting came on a Tuesday night in early March: Courtney was in labor. They rushed to the UIHC hospital and waited for several hours before Michelle burst through the doors announcing that Ty had been born but wasn’t doing well. The doctors found a heartbeat, but he wasn’t breathing.

By God’s grace, the medical professionals were able to get Ty stabilized. He had various tubes in all kinds of places, and he was placed in an incubator. He was given several antibiotics because they believed he had some kind of infection. Although Ty was stable, the Vander Molen’s minds still raced with questions of what sort of effects would occur from the lack of oxygenation.

Ty was diagnosed with a collapsed lung and pulmonary hypertension. He was placed in an incubator with a mask over his eyes. He was given the label of “low stimulation,” which meant the Vander Molens could only reach their fingers through a hole to touch his foot.

For two weeks, Ty’s status remained unchanged. He was alive but not well. 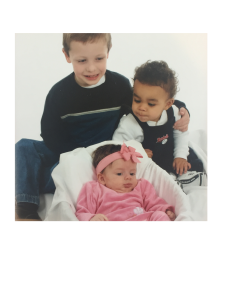 Slowly, things started to improve, and after three weeks in the NICU, the Vander Molens finally got to bring their son home. About two months later, Steph became pregnant again, and Claire Elizabeth was born about 10 months after Ty. They’ve been two peas in a pod ever since.

Ty, who is now 13 years old, continues to have some respiratory issues, but overall, he’s experienced no developmental delays. He’s a fun-loving, easy-going, and well-adjusted kid. He loves spending time with his friends; playing disc golf, sports, and video games; running around the back yard with his dog Zeke; watching Netflix; and pulling pranks on family and friends.

Ty’s adoption is no secret to him. In fact, adoption is a word the Vander Molen’s have used since Ty’s first memory. Because Ty is biracial, the Vander Molens had no choice to hide the fact that he was adopted, so they’ve been open and matter-of-fact about it since the beginning.

“It’s been good for Ty to understand that he was loved by his biological family,” said Troy. “And we want him to appreciate the fact that his birth mother made an extremely difficult decision, a great sacrifice that was done for his best interest.”

Adoption can be an expensive process, a reality that certainly prevents otherwise willing couples from pursuing it. Having gone through the process themselves, the Vander Molens have come to understand the reason behind some of those costs. Bethany Christian Services is special to them because their mission is to physically, mentally, and spiritually care for pregnant mothers, and by doing so, prevent many abortions.

Kinetic Edge Physical Therapy is proud to help raise awareness for adoption during National Adoption Month. Kinetic Edge clinics are donating $20 to programs that support adoptions, including Bethany Christian Services, Holt International, and Cornerstone Church in Ames every time a past client refers a new client their way.

If you are able, Kinetic Edge and the Vander Molen family would love for you to consider a way to celebrate National Adoption Month with them! Some ways you can celebrate include reaching out to a family who’s adopted a child to learn more about their experience, donating to an adoption agency like Bethany Christian Services, or praying to discern if adoption might be right for your family.