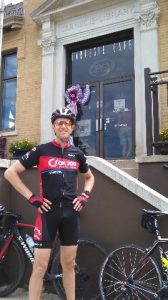 If I told you I biked 200 miles in one day last month, what would you think? Perhaps it puts it in better perspective if I say that I biked from West Des Moines to Okoboji, what takes 3 1/2 hours to drive by car, in one day. Typical responses I’ve gotten are, “You’re crazy,” and “Why are you doing this?” So let me explain my “craziness”.

Four years ago my friend Rocky Vest invited me to meet on his driveway at 5:30 am on Wednesdays to go for a one hour bike ride. An early morning ride was an easy sell, since I have been a cyclist since getting into the sport in eighth grade. Rocky was training for a ride that he helped start the year before, called the Okoboji 200 (OK200). This organization uses cycling for 200 miles as an opportunity to raise awareness and funds for human trafficking in Nepal and S.E. Asia.

Our training rides led to my first attempt at the OK200 in 2013. This ride proved to be a challenge with headwinds at up to 37 miles per hour. The group changed course at mile 100 and headed back to Des Moines. My vacation plans did not allow for the turn around so I did not reach my goal.

Fast forward to June 2015. OK200 continues to grow in size and impact for the human trafficking cause, adding a local charity in central Iowa that helps restore victims rescued from sexual slavery. I felt led to commit to the event again and started several months of focused training, including long bike rides, running, and weight lifting.

On June 26, our group of 38 cyclists left Valley Stadium for the 200 mile trek to Okoboji. Our day started with pleasant temps in the 60’s, light rain, and minimal wind. After a few mechanical issues in Waukee, we rode the Raccoon River Valley trail to Dallas Center, before riding some of the lightly travelled county blacktops. I enjoyed conversing with friends and meeting several new people as we journeyed.

Rest stops were planned around every 30 miles with a much needed noon meal at our half way point in Lake City. Mile 100-130 proved to be the toughest part of the ride for me due to stomach cramping and the mental challenge of knowing we still had 100 miles to go.

After our 130 mile break in Fonda, we continued north into a somewhat forgiving north headwind. The route continued through the countryside towards our final destination: Christy’s Point on Minnawashta Lake at 200 miles.

During the day, I found myself in prayer several times for those we ride for; pondering the unimaginable pain they deal with made the pain of our trip seem insignificant. Over $50,000 was raised for the human trafficking cause on behalf of OK200, but the ride and need continue.

Visit okoboji200.org for more on the reason we ride, so they can be free.