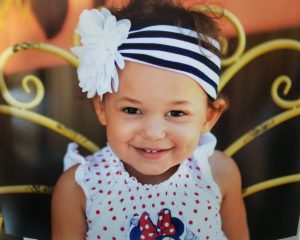 On July 6, 2015, Jack and Megan Turner welcomed their fourth child, a little girl named Vivian, into the world. For the first year of her life, Vivian seemed to be hitting all her milestones and growing right along. But once her first birthday came and went, her parents began to notice that she wasn’t behaving like other one-year-old kids.

The differences were small. Vivian wasn’t saying words or babbling. She didn’t make eye contact and didn’t seem to be playing with toys like she should. After they continued to notice these small differences, the Turners sought out their family doctor. Their doctor recommended bringing Vivian to be evaluated at the University of Iowa’s developmental department, so the Turners did.

The evaluation lasted for most of the day, ending with a sit down with a specialist. That was the moment the Turners learned that Vivian was diagnosed on the autism spectrum, along with a speech and developmental delay.

“Truthfully, I don’t think I heard much after that,” shared Vivian’s mom Megan. “We left and when I got in the car, I sat and cried thinking, ‘What in the world do I do for autism?’ Knowing there isn’t a ‘cure’ for autism was the scariest thing to me.”

The Turners faced a lot of fear and unknown after this diagnosis. They wondered if Vivian might grow out of this or if there would be medicine that could help. Their world looked bleak, and they feared how this diagnosis would impact their sweet little girl.

Occupational Therapist Elise Spronk performed Vivian’s initial evaluation. She discovered that Vivian was struggling with her fine motor skills, as well as not really playing with toys. Vivian preferred to line toys up rather than play with them. In addition, Spronk noticed Vivian’s social interaction, her ability to dress herself, and her ability to eat with utensils could all use work.

“At the start of therapy, our goal was to just have Vivian attend long enough to an activity to participate in play without quickly going from one activity to the next,” shared Occupational Therapist Elise Spronk. “As this improved, we were able to focus more directly on her skills so that she’d be able to participate in other play and self-care skills.”

After a year of weekly occupational therapy, the Turners notice a drastic change in their almost four-year-old daughter. Vivian used to hate the feeling of any wet texture and now plays with items like wet sand and shaving cream, an indication of improved sensitivity to stimuli. 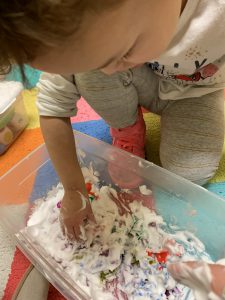 “This little girl who couldn’t even put a finger in something like that is now putting whole hands and arms in,” Megan exclaimed. “After seeing these changes happen week after week, I started telling myself this is happening and is real. It has been a huge life changer! Kinetic Edge has been nothing short of a God-send really.”

Life now looks a lot different for the Turners than it did three years ago when they got Vivian’s diagnosis. Thanks to help from therapies, school, and home life, Vivian now says words and babbles all the time. She even enjoys getting into messy things. While Vivian still show signs of delay, the Turners outlook on this diagnosis completely changed as they’ve been filled with hope.

“I believe Vivian will live a full, self-functioning life when she gets older,” said Megan. “We have a cheerful and happy-go-lucky daughter who shines light on our lives every day! I wouldn’t change anything for the world.”

Kinetic Edge’s mission is to transform lives and restore hope through movement. Vivian is another one of the stories that attribute how they’re bringing hope to individuals of all ages in Iowa. A  child with delays in developmental milestones, abnormal sensory preferences, trouble with reflex integration, or difficulty with visual perception can benefit from pediatric occupational therapy. These symptoms sometimes occur for no apparent reason and other times can be the result of a specific diagnosis. To find out more about occupational therapy at Kinetic Edge, call 866-588-0230.